Beyond the Nest Reviews The Magician's Daughter | Kids Out and About St. Louis

Beyond the Nest Reviews The Magician's Daughter 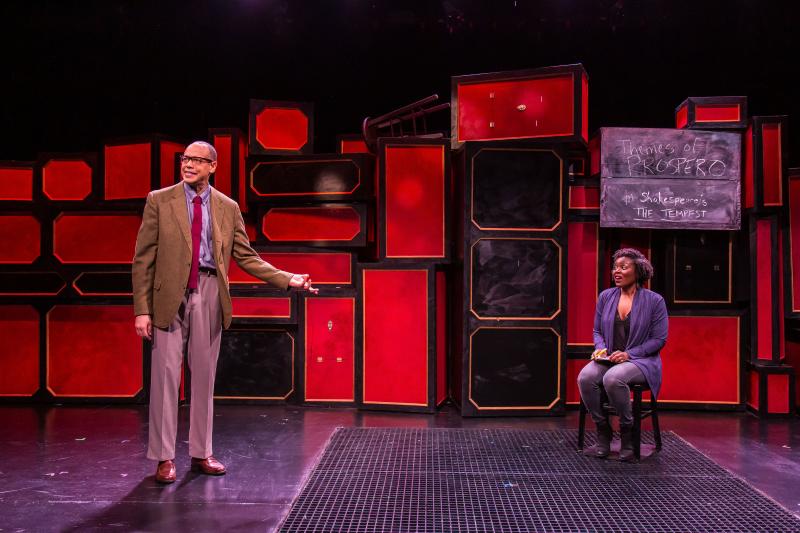 The Magician’s Daughter is a sophisticated, multi-dimensional production that examines the intricacies of father-daughter relationships.

We join Prospero and his adult daughter Miranda on the day she breaks away from their magic act. She has decided to strike out on her own, rather than forever remain the “magician’s assistant,” enabling him to surround himself with illusion… a metaphor for the appearance of normalcy her father conjures to veil his alcoholism. As with most who have secrets to hide, he does not want her to speak to "the audience," lest his secrets be revealed.

Unlike Shakespeare’s Prospero, whose magic enables him to control the elements, this Prospero’s magic is all illusion. In fact, his alcoholism prevents him from controlling many aspects of his life or protecting his daughter from the tempests he, himself, creates. Even after Miranda has left the magic show, each individual Miranda meets on her journey to independence magically transforms into Prospero, in a metaphorical sleight of hand…testament to how a parent who is “broken” will forever influence his or her child’s life and perception of reality;

As Prospero, Tyrone Mitchell Henderson is a chameleon. His tranformations are absolute, and he effortlessly morphs between loving father and alcoholic, trying to find absolution from his daughter. But will they be reunified in time?

As Miranda, Brittany Bellizeare is sublime. She is simultaneously powerful and strong, yet her fragility can materialize as quickly as one of the flowers her father pulls from her hair. Clearly, the note and umbrella left to her by her mother provided only minimal protection against her father’s sporadic raging storms.

Playwright Lila Rose Kaplan has created a fascinating work where the line between reality and illusion is fluid. In an interview with Jenni Werner, Ms. Kaplan mentions having seen a production of Shakespeare’s The Tempest and recognizing how terrible Prospero was to his daughter, in spite of his love for her. In this production, we symbolically experience the emotional abuse Prospero has rained down on his beloved daughter throughout their life together. As she faces the birth of her daughter, Miranda questions her own ability to be a loving, functional parent, undoubtedly as a result of her childhood.

The Magician’s Daughter is an intriguing, thought-provoking work, splendidly directed by Shelley Butler, with wonderful illusions designed by Michael Webert. If you were to see this work six times, each viewing would bring new discoveries and surprises.

The Magician’s Daughter runs under 90 minutes, with no intermission, and can be seen on Geva Theatre Center’s Fielding Stage through February 10.