Family-Friendly Food In and Around Savannah, Georgia | Kids Out and About St. Louis

Family-Friendly Food In and Around Savannah, Georgia

(Click here to get back to the more Southeastern US vacation review links.) 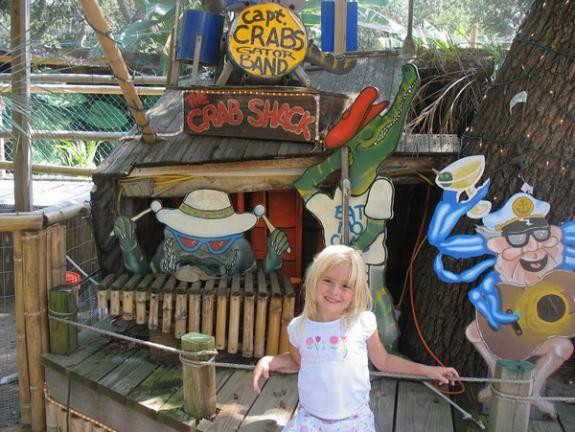 Reviews of family-friendly places to eat around Savannah, GA. 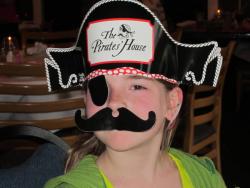 When I stepped into The Pirates' House, honestly? My heart sank. It was so crowded and so packed with pirate booty that it screamed tourist trap. There's no way, I thought, that the food would be good. I was completely wrong: the food was amazing.

The atmosphere was fun with plenty to make the whole experience a family-friendly destination. The location began as an Inn in 1753, and on the website and throughout the restaurant there are details about its history of caterind to seamen. Costumed pirates walk through the restaurant offering impromptu tours to anyone interested or just restles. There's also a gift shop located at the entrance, offering plenty to explore if you find yourself waiting for a table (which you may).

Once you've obtained a seat (there are a whopping 15 separate dining rooms), service is prompt and will include some of the best biscuits you've ever tasted. Eat them while they're warm and melt-in-your-mouth with the proffered honey butter. Try not to groan out loud while you do so.

The children's menu offers a wide selection of kid favorites (fried chicken, fried shrimp, hot dogs, and grilled cheese) along with "mocktails" like virgin daiquiris to start and pint-sized desserts. Decisions made, you can disassemble your menu to costume yourself as a pirate! Along with the children's menu there's another dining-with-children favorite: a buffet. 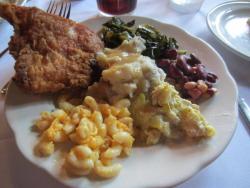 If you're looking for an overview of the most delicious foods Southern cooking has to offer, The Pirates' House delivers. This plate includes (clockwise from top) collards, bean salad, squash casserole, macaroni and cheese, fried chicken, and mashed potatoes and gravy in the middle. The surprise here was the squash casserole. I'm not a fan of squash, generally, and I was attempting to suss out exactly what ingredients were causing me so much pleasure: crab? artichoke? Nope. Apparently it was mostly squash, butter, and a great deal of cream. Yes: you'll feel the need to pay for your culinary sins after eating here. But those extra workouts will be worth it. 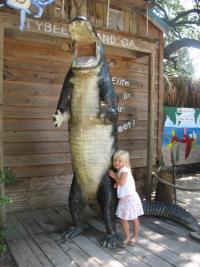 The Crab Shack is all about the atmosphere. Located just off Route 80 between Savannah and Tybee Island's beach, it's a fun place to have seafood and drinks as part of your beach trip. The sign says "Where the Elite Eat in Their Bare Feet," and it's ultra-casual. Which is perfect when you have sandy, exhausted kids in tow. It's sheltered but basically outdoors, so you'll want to dress accordingly, but if you find dining in restaurants with kids stressful, you'll be surprised how relaxing it can be.

The big attraction here for kids is the animals: live alligators (you can even buy food to feed them), birds, and friendly cats who roam from table to table. Unlike most restaurants where the kids are impatient for food and ready to go once they're finished, you might have to drag them out of the place. 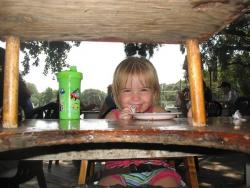 As you might expect, the menu emphasizes seafood, but there are children's menu basics like hot dogs. We grown ups were particularly big fans of the clam chowder and the brunswick stew. Our kids liked the pulled pork and the basic low country boil: shrimp, corn, potato, and sausage. They all loved the fun, messy atmosphere, including the whole in the center of the table where you could toss your shells and other trash. Really, they couldn't have been happier. Which allowed the parents to enjoy a margarita and take a deep breath before continuing with the vacation.

Leopold's Ice Cream in downtown Savannah makes all their own ice cream and serves it up, along with sandwiches, soups, and salads, in a beautiful space that's part old-time soda fountain joint, part Hollywood memorabilia exhibit. We only stopped in for ice cream, ourselves, but our Savannah hosts love Leopold's for lunch, especially the shrimp salad sandwiches. Their offerings include kid-friendly options like peanut butter and jelly and turkey and cheese as well. But if you're coming with kids, you must do the ice cream! It's some of the best you'll taste. In addition to the regular ice cream flavors, there are gorgeous and unique seasonal flavors that are available each month, In fact, we happened to visit on April 1st and were lined up with a regular who was breathless with excitement awaiting his chance to sample the April selections, which included lavender and Japanese Cherry Blossom.

First opened in 1909 by Greek immigrant brothers, Leopold's closed for more than 30 years before one of the founders' sons returned from a career in Hollywood to re-open the place, hence the movie posters and other fun memorabilia. It's located right in downtown Savannah and a short walk from Juliette Gordon Low's birthplace. In fact, you can even get a Leopold's Girl Scout patch! There's a pleasant and cool dining room where seats might be scarce, but service is attentive and friendly. With yummy ice cream at a place this cute downtown, you're llikely to encounter a line like we did, but it moves fast. While we were there, a staff member circulated and offered cold water, and we didn't mind waiting a bit. We had tough decisions to make. 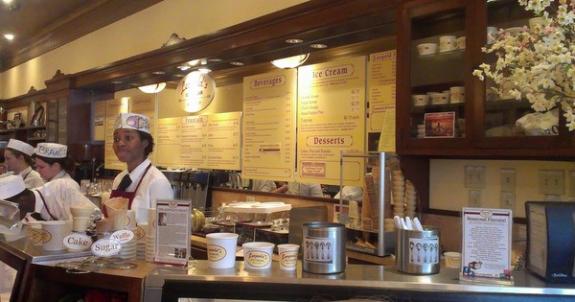 (Click here for places to go and things to do with families in Savannah, GA.)

© 2013 Katie Beltramo. Katie is the Albany-area editor of KidsOutAndAbout.com. She also blogs at CapitalDistrictFun.com.