Missouri Botanical Garden | Kids Out and About St. Louis 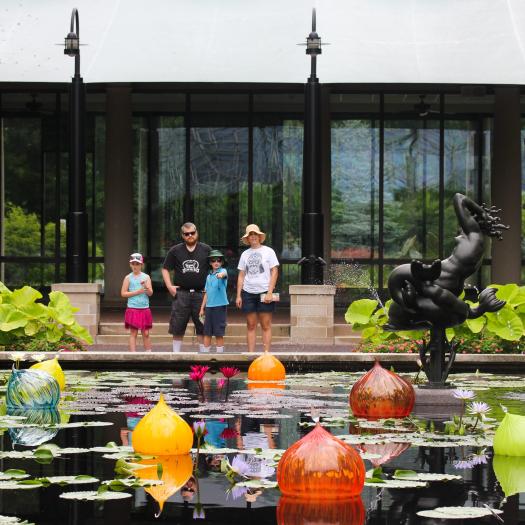 Founded in 1859, the Missouri Botanical Garden is the nation's oldest botanical garden in continuous operation and a National Historic Landmark. It is a center for botanical research and science education, as well as an oasis in the city of St. Louis.
Click For More Information

The Garden offers 79 acres of beautiful horticultural display, including a 14-acre Japanese strolling garden, Henry Shaw's original 1850 estate home, and one of the world's largest collections of rare and endangered orchids.

Early morning hours (grounds only)
Wednesdays and Saturdays, 7 to 9 a.m.*

One day in the spring of 1819, 18-year-old Henry Shaw, an Englishman recently landed in the river town of St. Louis on the edge of the American wilderness, took a half-day journey on horseback out of town. Riding westward through marshy ground, past sinkholes and Indian burial mounds, he came at last to a narrow path cutting through brush, and found himself on elevated ground overlooking a prairie. “Uncultivated,” he recorded, “without trees or fences, but covered with tall luxuriant grass, undulated by the gentle breeze of spring.”

If ever a man loved a piece of ground, it was Shaw. As Shaw’s fortunes grew, he resolved to return something to his adopted city, and 40 years after his arrival in St. Louis, he opened on the land he so loved a botanical garden for the city’s residents. This garden is today the Missouri Botanical Garden. One of the oldest botanical gardens in the U.S., Missouri Botanical Garden is outstanding not only in the excellence of its displays, but also in the richness of its architectural heritage and the importance of its botanical research.

Garden founder Henry Shaw came to St. Louis in 1819 to open a business selling hardware and cutlery. As St. Louis flourished in the second quarter of the 19th century, and the city’s population grew, Shaw’s business expanded to include investments in agricultural commodities, mining, real estate and furs.

From gardening practices to nature study and everything in between, the Missouri Botanical Garden offers a full range of classes for adults, families and children of all ages. Weekend, evening and weekday classes/programs are offered year-round.
Class Info
Web Service