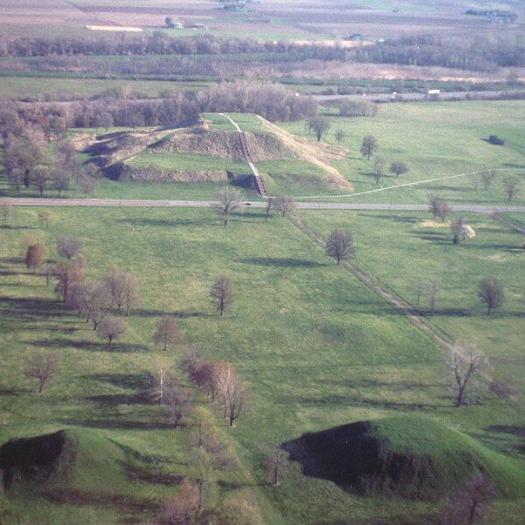 The largest prehistoric Indian Site north of Mexico covered about 4000 acres included at least 120 mounds. The site was named a U.S. National Historic Landmark in 1965, and in 1982, the United Nations Educational Scientific and Cultural Organizations designated Cahokia Mounds a World Heritage Site for its significance in the prehistory of North America.
Click For More Information

Cahokia Mounds State Historic Site preserves the central section of the largest prehistoric Indian settlement in America north of Mexico. It covered nearly six square miles with 120 mounds and a population of 10-20,000 people of the Mississippian culture during its peak around AD 1050-1150.  A world-class Interpretive Center/Museum tells the story of this great Indian city with dioramas, murals, graphics, artifacts,and a recreated village. It has an award-winning orientation show, an excellent gift shop, and a number of outdoor interpretive trails, and guided and self-guided tours. Visitors can also climb the 156 stairs to the top of 100-foot-high Monks Mound and visit the reconstructed Woodhenge sun calendar. Special events, programs, lectures, craft classes, and more are held throughout the year. The Interpretive Center is open seven days a week from May through October; from November through April it is closed on Mondays and Tuesdays.The grounds are open from 8 am to dusk. For more information, go to the web site at www.cahokiamounds.org or call 618-346-5160.